Grillz means a flexible jewelry item worn over the teeth, traditionally crafted of fine metal and set with valuable jewels. Grillz are usually applied as a form of self-expression and personality, as well as an opportunity to exhibit something dazzling. Nonetheless, they may not be the perfect idea for your smile. 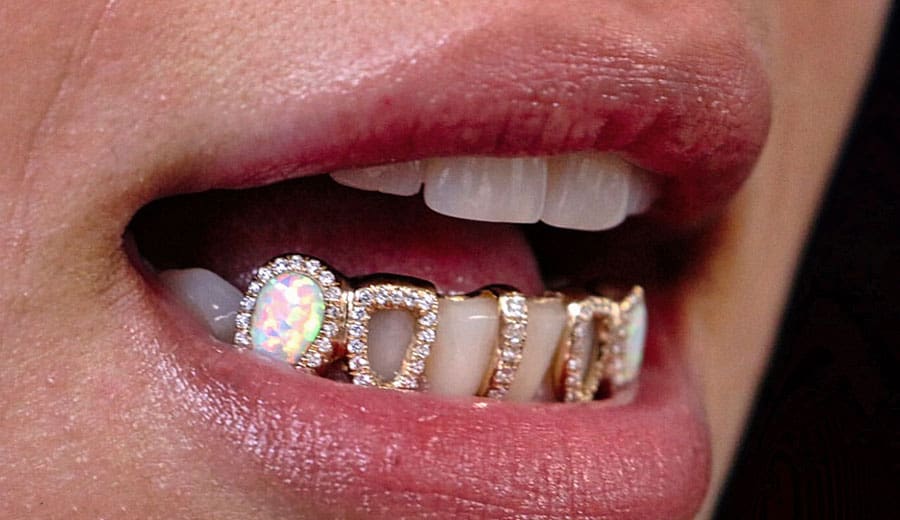 Grillz is similar to the traditional RN in men’s jewelry. Shining bright, glamorous, sparkling grillz that grace your teeth, giving the expression “a millions of dollars grin” a whole new meaning — Pharell’s newest is worth $100,000 with precisely cut sapphires, sapphires, and emeralds, while Post Malone just got diamond fangs worth a total of 12 carats with the surge in popularity of Southern rap singers, the fad of flashing false teeth has taken off. There are several designs available for permanent, bespoke, instant, gold, and genuine diamond teeth.

Male rappers like Slick Rick, Big Daddy Kane, and Kool G popularised the style in the 1980s, passing it on to rappers such as Nelly, whose 2005 song “Grillz” was an homage to his diamond and raised gold set. Hip hop performers like Raheem the Dream and Kilo Ali started wearing grills in the early 1980s; New Yorker Eddie Plein, proprietor of Famous Eddie’s Gold Teeth, is frequently credited with establishing the craze in New York around the mid-1980s.

Gold teeth, or “Grillz,” are just a rank symbol inspired by the ancient Mayans who chipped jade into their teeth. Instead of drilling teeth, dentists put grillz around them. First, they create a replica of your lower and/or upper teeth. The grill is then adjusted into your teeth by using molds as a template. There really is no proof that Grillz are or are not safe to use.  However, there have been instances of allergic responses to the grillz element, as well as occurrences of gum disease, cavities, and bone loss. These were all caused by grills that did not fit into a person’s mouth or grillz that were installed by a non-professional, unlicensed dentist.

Grillz could be traced back to the Etruscans who lived in Italy from 800 BC to 200 BC. Grillz were worn by privileged Etruscan women as a symbol of wealth, power, and equality, with their front teeth eliminated and fitted with alternatives held together by a gold ring.

This style is appropriate if you intend to carry it for an extended period of time. The 14k attaches to your teeth permanently, so you don’t have to remove them on a regular basis. If you want them permanently removed, you must go to a dentist or the Grillz business. Gold is almost completely harmless to your teeth. It is safe to wear them and style yourself like Diamond Teeth Celebrities.

The advantage is that you may wear or remove it whenever you choose. This kind has a restricted selection and is less configurable. However, if you want to show off your grillz grin, this is a terrific alternative for sparkle and bling.

Celebs who use it most often

Jacobs truly has jewels on the tip of his tongue. Jacobs, the newest addition of the grillz group, opted for Tiffany blue and diamonds handcrafted by father-son Grillz pair Gabby Elan.

Beyonce rocked some vampiric-looking silver spikes. In her music video for “Bow Down,” she also had a complete diamond grill on her bottom teeth. Hence if obsessed with Beyonce, get mouth grillz for starters

Erykah Badu is the accessory king. Her lavish headpieces, eye-catching rings, and intricate necklaces are one thing, but her blinged-out grillz are quite another.

Grillz can be both permanent tooth implants and temporary cosmetic caps over your teeth. These two varieties are entirely opposite in their intended usage, yet have a similar aesthetic aspect from the outside.

Diamond dust grillz feature a diamond dust finish that is less dazzling but still draws the attention of people around you. This makes them glitter and shine without dazzling people in front of you. Because there are so many various finishes to pick from, this is a particularly popular design among newbies.

If your grillz don’t match your teeth very well and you continually strike them, the surface on your teeth will wear away. However, if you eat with your grillz on and don’t wash and clean your teeth or the grillz itself on a regular basis, food remains and other debris will begin to accumulate around your teeth. This, in effect, can result in the growth of dangerous germs and a variety of other dental issues. This is one reason why some people claim that wearing grillz produces foul breath. If this occurs, it is most likely due to a buildup of germs in your mouth. Last but not least, the presence of so much foreign stuff in your mouth might induce gum irritation.